How to Wear Headcovering In Public [closed]

Want to improve this question? Add details and clarify the problem by editing this post.

If anyone gets upset with question, I apologize in advance.

I just have desire to cover my hair. More like a dupatta (below).

How to do this?

I live in metropolitan city with many immigrants and minorities. 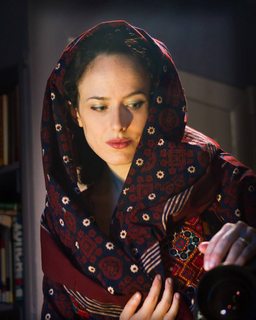 I interpret your question to be

how can I deal with possibly being treated differently and/or with some hostility by American people while choosing to cover my head in public?

If that is not an accurate interpretation, please edit your question to clarify.

I am Indian and know (though people who are not very familiar with Asian religions and culture may not be aware) that covering the head in public for religious reasons is practiced by Middle Eastern, Southern Asian, African or American women and men belonging to at least 4 different religions -- let's not go into the details, to avoid potentially argumentative discussion unrelated to your situation, but covering the head is required of believers by multiple orthodox religions for different theological reasons.

However, perceptions of head-covering in the Western world have been shaped by both

for both of which head-covering is seen as a visible marker.

There is a pervasive idea (among men and women whose religions do not require head-covering) that this practice is imposed compulsorily on women by men, but many recent explanations by women who choose to cover their heads for religious reasons emphasise their free personal choice due to individual religious convictions, which they claim as an unalienable part of their right to practice their religion in a free society.

In short it is your fundamental right in a free society to cover your head if you want to, even if not for religious reasons, except where certain governments have legislated against the practice, but you need to be aware that just as you are entitled to your religious rights, so also individual persons and communities are (sad but true) 'entitled' to their religious and cultural prejudices, which it is not possible for anyone to change in a hurry, nor advisable for you to address as a non-native person in a Western country [if that description of your situation is not accurate, please edit your question to clarify.]

By choosing to do something that 'goes against the grain' of the prevailing culture and social expectations, you are choosing not to 'dissolve' into the local culture but to practise your religion conspicuously at risk of being treated differently and/or with hostility by the majority community, or else to give that impression to others, if you are not doing it for religious reasons. Whatever be your motive, it is your right but exposes you to social stress, and you know it. So you must be well prepared psychologically to deal with the backlash:

In general it is good to be in tune with the social and cultural expectations of the society you are living in, even as a non-native person, but would I give up being a vegetarian from birth for religious reasons, and eat meat simply to blend in? It cuts deep and creates internal conflict, but many immigrants have compromised their religious beliefs and practices to 'purchase peace' in a new place. It avoids a great deal of unpleasantness arising from ideological differences, misunderstanding and prejudice, and allows the person to concentrate on building their life and work. However, the greatness of the USA nation and society lies in allowing every person the fullest cultural freedom provided by the law, and I am sure you will soon learn to exercise your personal or religious rights in harmony with the local community.

You can wear what you like in the U.S. but it will affect people's perception of you and will put demands upon your interpersonal skills as well.

People in general have a deep rooted instinctual distrust of anything that is distinctly different. This used to be a survival trait. Now it's largely baggage. But it's nevertheless very real.

Even people that value diversity will often be uncertain or distrust something that is both alien and new. At least at first until they have a chance to get used to it or think the issue through.

If you choose to wear something unusual, like a head scarf in the U.S. is then you should expect that many people will stereotype you based on your clothing. And be aloof, distrusting or negative when they first interact with you because you are doing something that marks you as clearly different than they are - and a lot of people are uneasy because they aren't sure what that really means.

This occurs for many reasons, it may simply be outside of someone's experience and seem odd to them or they may feel uneasy because they don't know what to expect. Sometimes there is a strong negative association because some people feel that certain ethnic groups are associated with post 9/11 terrorism.

If you want to create a good impression, diffuse tension and have positive social interactions where you like (which is the U.S. at the moment) then you should leverage your interpersonal skills to counteract the negative first impression that the scarf will have on some people around you.

Good deportment and open body language will help overcome any uncertainty that people feel over your scarf. Realize that if you choose to wear an entire ensemble of clothing that is unusual that will have a much higher impact than if you wore just the scarf with otherwise unremarkable (for the U.S.) clothing.

Most of all interact with people in a positive manner as much as you can. Even if it's as fleeting and simple as a smile or saying hello can do a lot to turn something perceived as off-putting into a positive impression because people lose focus on the scarf and instead start to build a positive impression of you as a person.

Realize that if all of your clothing is ethnic or unusual for the U.S. that it will have a much larger impact than if you are just wearing a scarf along with otherwise unremarkable (for the U.S.) clothing. Open, positive, strong body language will help a lot and will an outgoing and friendly personality (or as much as possible if you happen to be shy).

When you choose to do something that is well outside the norm - whether it is an ethnic scarf or someone dressing as a punk rocker that people will often have strong first impressions and often stereotype you because they see someone unusual, probably out of their normal experience and that singles you out as different. And different is often a negative stereotype for people.

But first impressions can be overcome rather fast if you make an effort to smile, be friendly and engage people around you - simply talk to people and be generally positive and most people will quickly judge you on the merits of your personality rather than the scarf that you are wearing.

Not the answer you're looking for? Browse other questions tagged conflict-aversion cross-culture clothing or ask your own question.

22
Is it appropriate for a non-Japanese person to wear a yukata when going to fireworks?
19
Does the "never wear white to a wedding" rule of etiquette only apply to weddings attended in the United States?
5
If and how to point out wardrobe malfunction in someone of the opposite sex
7
How do I handle unsuitable requests for endorsement of jobs/internships applicants?
13
Dealing With Unwanted, Repeated, Public Advances
3
Asking my sister to show less display of affection to her SO in public
4
How to negotiate about drying clothes with someone from a culture who isn't used to it?