Are there any ways to avoid unwanted approaches when not wearing a wedding ring?

I'm sure this is cultural--I'm looking for answers relating to the United States.

Are there any ways to avoid unwanted approaches short of wearing a ring, such as mentioning that I'm married every once in a while, etc.?

Neither my husband nor myself wear a wedding ring, purely out of preference. We both strongly dislike wearing jewelry.

There is nothing magical about a wedding ring. It can be taken off. Some people will completely disregard the presence of a ring in the first place and still show interest.

It's a matter of attitude. Ring or no ring, I'm married and loyal to my partner and that means that my approach toward men is not the same as if I were single. I have boundaries that indicate as much. I don't entertain flirting, I don't lead people on, I turn people down if they express interest.

My husband is so integrated into my life that pretty much all of our acquaintance knows we are married and if I meet someone new, it naturally makes its way into the conversation. I don't need to force it. If I do notice someone is interested, I am a bit more careful to refer to my husband in conversation and sometimes just state "Sorry, I'm not interested. I'm married" if they ask me out.

Wearing a ring is no guarantee that people won't be interested in you or flirt with you. What indicates to them that you are not available is your attitude toward them and your response to their interest.

Wearing a ring is not guaranteed to stop unwanted advances. Not wearing a ring does not invite advances. The only way someone would reasonably think that you're interested is if you indicate as much.

I believe your concern with women interested in married men is more realistic, but only slightly so (as I imagine those interested purely in being mistresses are quite few in number, and otherwise a woman not so inclined would have to find you insanely attractive to throw away some moral fiber). This problem can be dealt with by explicitly stating your marital status and your interest in maintaining the status quo.

Actually, some people think the opposite! A former work colleague who had been married less than a year once pointed to their wedding ring and boasted to me that the ring actually attracted more advances from women (I decided to spare you the expression he used because it was quite offensive). But I do believe there is probably some truth in this - some people (because I'm sure that this could apply either way and to either gender) may actually see chatting up a married person as a challenge. I have also heard it said that some single people seeking stability in their own lives actually pursue married people because they imagine that person is more likely to be committed. In cases like this a wedding ring could actually be a visible sign that you've got what they are looking for! Of course, this seems faulty reasoning to me - anybody willing to leave their partner for someone else is the exact opposite of "committed"!

Without moralising or getting into psychology, I think it is fair to say that people who seek extramarital affairs, and those who carefully safeguard against affairs think quite differently from one another. So chances are they view the wearing of a ring (or not wearing one) differently too.

To answer your question, the best way to avoid unwanted advances is by your words and actions. Whether or not you wear a ring in my opinion will make no difference. If someone is looking to have an affair then a ring will not put them off.

If someone does make a suggestion you do not like, say:

There is no misinterpreting this. Some people believe that saying "I'm married!" can be interpreted as an excuse and not a rebuff.

If you feel you would like a visible, outward sign that you are happily married other than wearing a ring, why not keep a photo of your wife/family on your desk, or wherever you are facing these challenges?

To expand on answers already given, you could also mention their wife in conversation more if the other party is not understanding your lack of interest, such as "Oh my wife also likes x" or "My wife and I did this recently". This way you're showing the interested party that your wife is on your mind, and you're constantly reminding them that you're also married without saying "I'm married" every 5 minutes.

The quick answer is, there is no easy way other than a ring to signal you are married, before you receive unwanted attention. That's just how it's done in the USA. When I did building construction I wasn't permitted to wear rings on the job site. During the day, when I went out to lunch, or if I forgot to put my ring back on, the flirting from women was merciless.

When I was wearing my ring, I received virtually no attention from other women. In my conversations with women, they find it quite frustrating that men will remove their wedding rings when they're looking for something on the side.

So, even a tan-line that shows where a ring is usually worn--and I've heard this in conversation--is ample indication for women to just stay away.

In my experience the wedding ring works so well to deter other women that right after I got married I had to get used to the change. I thought there was something wrong with me. But I quickly realized it was just the ring.

That's not to say there aren't other things that are tells that a man is married, especially to people in his social circle. The habits a man keeps usually demonstrate more than anything the devotion of a family man.

In my experience, no there aren't.

I've been married for about 30 years now, and have been hit on twice (that I've noticed. I'm kinda dense about those things). Both times I happened to not be wearing the ring due having just exercised.

How big of a problem that is, that's up to you I guess. But the ring is society's accepted standard way of signaling that you are in a committed relationship. There's no other obvious way of finding out you aren't interested in a relationship without physically asking you. If you have to tell someone you are married, even in casual conversation, the approach has already occurred. A ring is the non-verbal signaling that is used.

What I'm seeing a lot of people do these days who don't like the drawbacks of wearing traditional wedding rings is use silicone wedding bands. They aren't nearly as dangerous to the wearer as a metal ring, come in a variety of colors, and are so cheap you can buy several for different occasions/outfits*. Some people even sell them in variety packs. Pictured below is a pack I found for sale online for only $11. 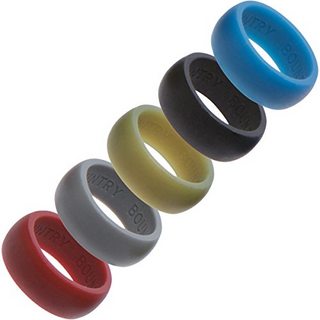 I have a nice silver/gray one that I can wear working out now (so much for that problem!). I also wear it for everyday use. At my age my fingers and knuckles swell a bit after a full day's use, making a rigid metal ring uncomfortable to wear, and a huge pain to remove. My old gold wedding ring I now only wear when I dress up.

* - Black seems to be the hipster color du jour. Camo ones I see around in Oklahoma a lot too.

I am married and do not wear a ring.

In the rare cases /sight/ where another woman was showing some interest in me, I was just bringing in the topic of my wife and children into the conversation. I made a point to make it natural to give that other person the ability to back off easily without spoiling the discussion.

Not the answer you're looking for? Browse other questions tagged united-states socializing marriage or ask your own question.

114
How can I respond when someone asks me when I'm going to get married to my girlfriend?
19
Two friends and their wedlocked affair
9
How can I explain to my parents my decision to live in co-ed housing next year?
74
Asking a coworker to discontinue his chivalrous acts towards me?
18
How can I lay out my reasons to my girlfriend for why we shouldn't get married?