I am at a crowded food court, food stalls all have a 20 minutes queue, and not a single seat is available. Eating outside of the food court is not an easy option either.

But then there is this 4 people table with nothing but a small bag put at the middle of it.

I can only suppose that a person or group of persons has put it to "reserve" the table before going to the food stalls. I don't know how long ago they put it.

I am just one person, so I could eat on the corner of the table without touching the bag, and possibly be finished before they even come back. I could also simply wait for a seat to become free, which should take no more than 10 minutes.

(For other countries please see "Reserved" seats at crowded foodcourt?)

On this Kyoto University thread, someone describes what they do in such cases:

On a table where 4 seats were "reserved", I placed 4 triangle signs saying "Seat reservation forbidden".

Such signs can apparently be found in some places: 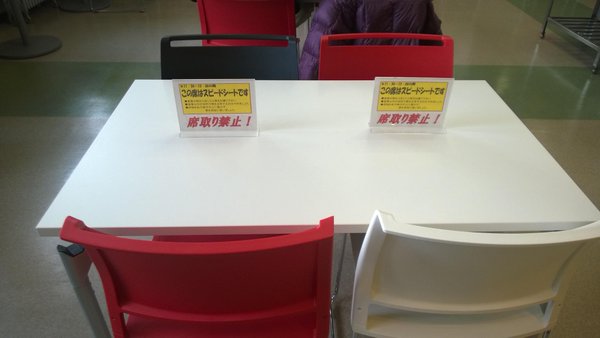 More humorous suggestions on this thread tell the asker to steal the bag (noting that unfortunately it probably won't contain any wallet), or throwing it through the window.

Reserving seats in a place with high and fast throughput is rude because it works against the concept of the restaurant. So keep in mind that the seat reservers are being rude, not you.

An easy way out is treating the bag, since it's a single one, as lost luggage.

Should you be interrupted between 1 and 2 by the owner of the bag, hand them their luggage after verifying that it's indeed theirs, for instance by checking that the bag indeed contains what they say it does.

This puts the onus on them to admit that they sought to reserve the seats, to which you can answer "how rude" if you want to drive that point home.

If they become rude and insist on you vacating the seats, get the staff involved. The whole concept of a fast-food restaurant is fast throughput, which "reserving" seats works against since it prevents other customers from eating.

Not the answer you're looking for? Browse other questions tagged public-issues etiquette japan restaurants reserved-seats or ask your own question.