How do I politely turn down a costume party invitation because I am too embarrassed to wear a costume?

I was previously invited to a friend's birthday party and was happy to go. They then announced that it would be a costume party (UK, so "fancy dress party") and I've had to pull out because I've never been able to wear costumes (it makes me embarrassed to the level of blushing so hard I feel faint - regardless of wanting to wear it or not).

Of course, this means they now know that's the reason and are trying to persuade me otherwise, since from their point of view going in a costume is just a bit of random fun, and they say I'm just being boring. At the same time, if I continue to press the point or even if I managed to get an exception to the costume rule, then a good chunk of the planning and appearance of the event would end up being defined by my personal problems, which is the last thing I want to do.

So how can I politely make clear that this is not an option for me without that casting a shadow over the whole thing for my friend?

Get a t-shirt that says "This is my Human Costume" 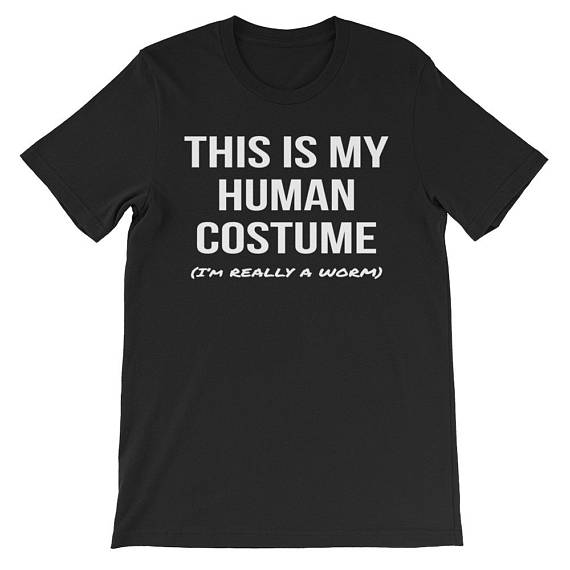 Neither boring nor are you forced to wear a costume. They already know your objections, and this way, you've participated ironically without having to bow to a dress code. You'll still have to plan your outfit, but it won't be about a costume. Anyone asks, say "I'm not big into fancy dress, and I'd said yes before I knew it was a fancy dress party, so this is me." or "I don't like dressing up, but I do like parties, so this is me." Or "I'm not into fancy dress, but I do like NAMES OF FRIENDS HERE and wanted to come out tonight."

This one says "I'm really a worm," but there are a bunch of others that say "I'm really a giraffe" and so on...the most that might happen is that you might have to answer questions about really being a worm or a giraffe. (Answer "I'm not a giraffe tonight for sure--I'm super human, look at me doing human things! I'm eating chips! It's a really good costume. Giraffes don't eat chips.")

There are other options out there "Sorry I left my costume in the TARDIS" for Doctor Who fans, t-shirts that say "This is my Lazy Millennial Costume" and so on...

Basically, this is the lowest of low effort while still fitting in and being fun.

Just keep in mind that really, no one will probably care. Other people will be far more worried about their own stuff to give it much of a thought unless YOU make a big deal of it. Because it doesn't need to be, and your t-shirt can basically say that. I've been to parties in the U.S. where folks have worn these, and it's never been a big deal.

Congrats, you have now made it politely clear without saying a word, even though they already know! Once you've bought one of these, you'll now have a standard go-to outfit for any fancy dress party! Do wear pants.

As for not going to the party at all--you've really already done your due diligence on that basically saying "I'm not doing a costume and I won't be the only one there not in costume." They are being the rude ones for not empathizing with you..You've pretty much said all that you can say, and they are being pushy and making you anxious. Just stay firm but kind if you opt not to go.

With my solution, you neither have to wear a costume, nor are you excluded from the fun. And, I've seen this on folks who don't like costumes and people who just didn't feel like dressing up.

How do I politely turn down a costume party invitation because I am too embarrassed to wear a costume?

As you say: they now know that's the reason and are trying to persuade me.

So, I'd say: be honest. Don't tell them the true reason if you don't feel like it, but let them know how their insistence on attending their party with a costume is making you feel really uncomfortable.

Put the cursor on your feelings, not on their behavior. Don't disclose what you want to keep hidden, but you need to set boundaries. Therefore, some explanation seems mandatory. For instance:

You guys already know how bad I feel about this costume thing of yours. Please understand that it's something I can't go over. It's personal. I don't want to spoil your party, but, at the same time, don't want to explain any further, or feel uncomfortable, bad or weird.

I was once in that kind of situation, very similar. I explained it to the folks in charge, they pushed a little more, I cut it short with a smile; and finally, didn't attend the party. I don't know if they noticed that I was not here, but I had no feedback, good or bad, the following days.

If it's a houseparty.

There might be solution were you don't have to wear a costume to the party without being seen as a 'party-pooper'(as i think that is the way you see it).

If there is a pub nearby which is ok and they quite like it too(especially if it's the hosts' local - just let them know and go for a drink there. Either the hosts or possibly one of the others will pull you to the do anyway.

Not a party exactly, 2 friends were going to a gig at a decent pub, we don't see each other that often, and somehow-(can't remember offhand)- I just had a drink or two with them beforehand. Dare say this arrangement could be called into play some othertime. It was nice to see them and a pleasant change from the routine as the pub isn't centrally located.

One thing you haven't said is if it's a houseparty or at a prebooked venue.

if it's a pre booked party- just ask if they wanted to meet up for a drink nearby beforehand.This would also have the benefit of giving them any cards or presents in person. In that way you're still involved and get to see your friends/family.

If you know of a mutual friend or character in a TV show you both watch who has some strong phobia, you could compare yourself to them and then redirect:

You know how Soandso is deathly afraid of spiders? I'm like that, but with costume parties. I've tried, and I just can't deal with it. But hey, I'd still like to meet up with you. Can I buy you lunch the week after? I'm really looking forward to seeing some pictures.

Adjust details as desired for accuracy (sub in clowns, heights, etc?) and the logistics of meeting up with them.

Not the answer you're looking for? Browse other questions tagged united-kingdom parties or ask your own question.