How to get recognition for the cleaning I do?

I live in a shared house with several other roommates. One of them signed the lease with the owner, and thus has authority to kick anyone out. Call him Dylan. Another roommate, Bob, is very outspoken and usually is the one making the actual decisions.

When I moved in I was told there was a cleaning system where everyone is on a schedule and has different chores that benefit the whole house (so not just cleaning up after yourself, but things like sweeping the hallway). I was never added to this cleaning system until several months later when we had our first roommate meeting.

I began to sense a negative vibe and couldn’t get a straight answer out of Bob/Dylan what was wrong. From the way they spoke to me, they seemed mad but wouldn’t tell me why. I spoke with my friend who was the one who recommended me to move in, asking if he could find out what was up. He told me they were mad at me because I hadn’t been helping clean, and they are thinking of kicking me out. My "friend" told Dylan I had been complaining a lot, and I guess this pushed him over the edge and he finally confronted me saying I didn’t do cleaning for the first several months.

The following statements are true facts

This is my understanding based on my observations: to Bob and Dylan it’s very important people take initiative and not be asked to clean. But it seems that they need to judge whether someone is helping or not. Most other people in the house make a big show of it when they’re doing something, I had assumed this was just their personality but I guess this is some kind of hidden way to prove they are helping. For example when someone was mopping he would say "come look how dirty the water is!" or "I’m going out to cut the grass now!". My personality is not like that, I think it’s immature to try to impress people by showing them you’re doing work. But, I’m willing to compromise.

So the question is, what’s the best way to get Dylan and Bob to think I am cleaning? I am comfortable taking pictures before and after and sending to them as proof, though this may be a bit too overt. (Dylan likes to stress the importance of "trust" though I think he’s being a bit hypocritical of this if he’s accusing me of not cleaning enough, so I think a discreet method is necessary).

My other idea is to clean up at the same time another person is, so he can vouch for me. I could play it up as "I just find it more motivating when I see someone else cleaning" (which I do).

I find it’s becoming counterproductive: now I see no point in cleaning unless someone is watching me since I’ll still would be accused of not cleaning. Also, being a shared house, I err on the side of caution. There are many situations where I see something that could be junk but I don’t want to through it out or move it encase someone needs it. To complicate matters my assigned chores are currently obsolete (the dishwasher broke down and there is snow on the lawn). Also since so many people are doing other things, I find it hard to find something that hasn't already been cleaned. This is why I tried asking what I can do to help, but they find this annoying. To be clear I always have been helping with cleaning, just not enough in comparison with the amount Bob and Dylan do.

In these types of situations would it help smooth things over if I make a friendly gesture, like buy pizza for everyone for dinner (of course in addition to actually cleaning more)?

UPDATE: for anyone else reading this I strongly advise against following the advice in the comments and answers. Sucking up to people doesn't work. With me washing everyone's dishes by hand gives no incentive to get the dishwasher working and it's simply wasn't fair.

A friendly gesture probably won't go amiss. But it's unlikely that "sideways" gestures, like buying pizza, will be effective over the long term. Cleaning is something that needs to be done regularly, and most people don't enjoy it very much, hence the schedule.

Some dirtiness is nobody's fault, like dust accumulating. But beyond this you are contributing some baseline amount of "dirtying" the house, no matter how careful you try to be, and so if you are assumed to not be cleaning (fairly or otherwise) you can expect some resentment. Further, it sounds like there legitimately has been a period in which you have not contributed much to cleaning the house, and people will remember that impression.

The only cure for this is to be observed cleaning or to take on a similar chore. This isn't a matter of blindly following the schedule-- that your chores are now "obsolete" (how are the dishes being washed now?) is no defense. The goal is to be seen as doing your fair share of maintaining the state of the house, and so you should consider asking for chores to do or taking the initiative to do things you see should be done. This isn't

What more can I do to chip in around the house?

With the dishwasher broken and the lawn covered in snow, I don't have any chores right now. I feel like a loafer, what other things can I do in the meantime?

If you don't get an actual answer including some task you can do, or a timeframe in which they'll get back to you, you should ask again at regular intervals or identify a task, start doing it, and say so.

The good news is that there are a lot of ways to make your cleaning activities more conspicuous. You, too, could offhandedly mention to a roommate that you're about to start cleaning. You could announce to your roommates that you will be doing your chore and want to be sure everything that needs to be done is there (e.g., if you're washing dishes, you can ask that anyone with dirty dishes bring them to you). You can ask if anyone needs anything in a pile that you're trying to tidy. You can also do your chores on a regular schedule, so people know that on Saturday afternoons Haptometer will be mopping the hallway. Cleaning in tandem with another roommate will also accomplish this goal and is a suitable idea. You can also try to do "obvious" chores, like taking out the garbage. If the garbage bin is always clean, someone is doing the chore.

None of this is "showing off"-- I doubt anyone is expecting to be showered with praise here or really impress the other roommates. Instead, they are making offhanded comments describing their activities (some people do this in passing), or they're making sure that their contribution is noted. "I'm bad at cleaning" is not a better argument here than it would be if you said "I'm bad at paying rent".

As an aside, based on other questions you've posted about conditions in this house I would not assume that any friction with your roommates (particularly Dylan and Bob) is due to any single, concrete issue. I get the impression that there is some underlying tension resulting from a variety of things, and specific examples may be more an opportunity to express those feelings rather than being truly about that specific issue.

So the question is, what’s the best way to get Dylan and Bob to think I am cleaning?

The only way to get them thinking you are cleaning is to clean, and do a damn good job. So your job is to do the dishwasher which isn't currently working. That is daily job isn't it.

Make it your job to ensure the hob is cleaned, the surfaces are wiped down, the sink and drainer are cleaned every day, any draining washing is put away.

Hey I know I owe you guys for the first few months, let me wash that up for you whilst I do mine.

Ensure every day the kitchen looks as much like a photo from a magazine as it is possible in your building.

Cleaning a kitchen well takes me about 1 hour. Do it at the end of the day after everyone has eaten their evening meal and done their washing up.

DO NOT MAKE A FUSS! Just go back and quietly clean up. Well I can't actually clean a kitchen quietly too much metal to move but you understand how i mean. Leave the floor till last then matter of factly announce "careful in the kitchen the floor is wet“.

People do notice if work is done and unassuming good work is better than obvious demonstrative working.

If you are spending 45mins to 1 hour everyday cleaning you can't stay secret for long.

Who does the housework at your parents house? How do you know that? 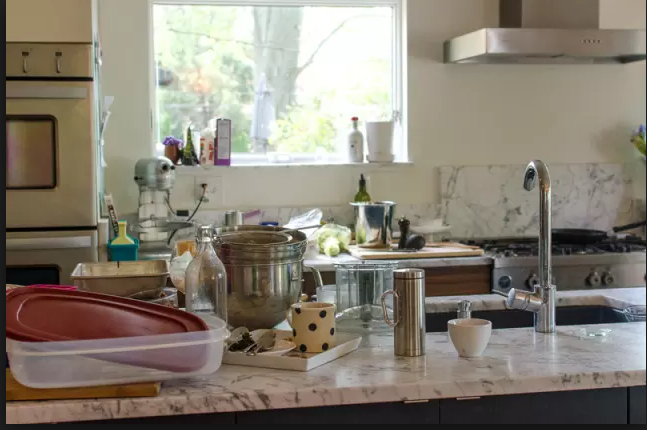 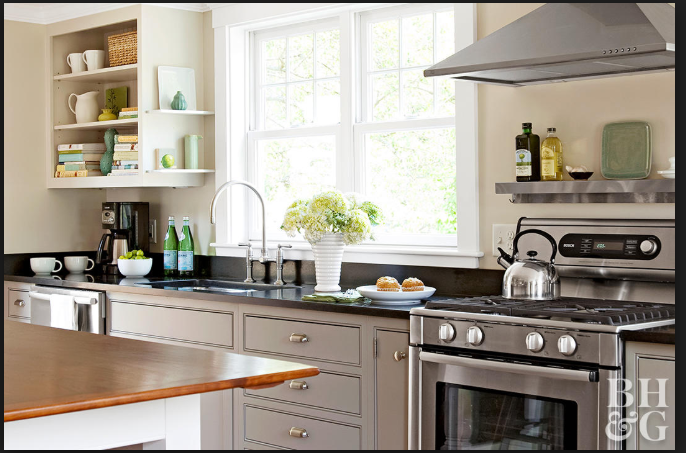 If you can't see the difference imagine trying to make food in each kitchen, do you need to do anything before you start in each picture? Is there enough space to prep in which picture?

The internet is awash with guides teaching you how to clean, tips tricks etc.

I am going to leave you to look at your garden and see what you could do instead of the snow covered lawn.

Not the answer you're looking for? Browse other questions tagged work-environment roommates non-verbal-communication or ask your own question.

10
How to get along with European roommates?
13
How to ask roommates not to use so much of common spaces for personal meetings
44
Asking landlord to stop letting himself in the house
8
Primary roommate wants me to give him copy of key to my bedroom and I don't want to
2
How to say I will not be participating in the current system of sharing costs (because I don't think it's fair), when people are easily offended?
2
How to communicate with sensitive roommates accusing me of passive-aggression?
2
How to insist roommate provides me with proof of utilities bill?
9
How to reply to "don't you trust me?" when asking to see bill?
3
Dealing with flatmates who do not care for cleanliness