How many "bise" (kisses) should I give?

Let's assume we are in a COVID-free environment.

In France, depending on where you are, we give different amounts of "bises" (kisses on the cheek) in greeting.

For example, we give two in Lyon, but three in Montpellier and only one in Brittany.

See this map for reference: 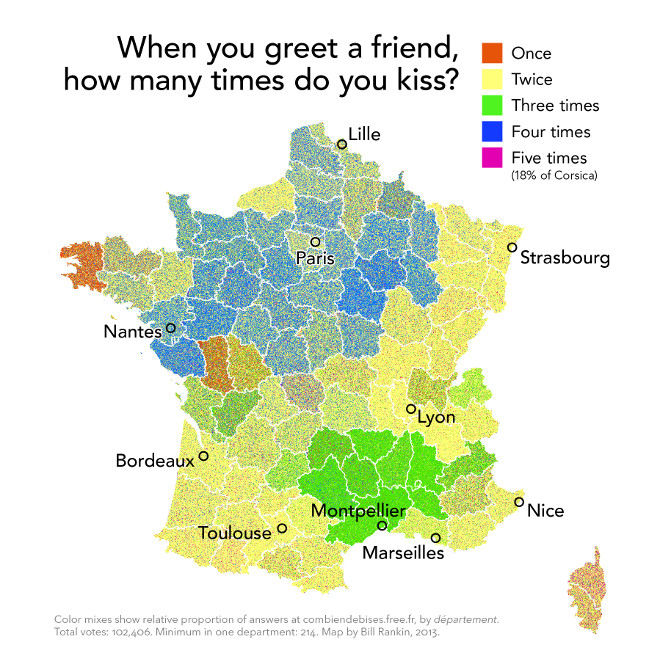 Given that, if someone from Montpellier comes to visit someone in Lyon, how many times should they kiss?

And what if these people from Montpellier and Lyon meet in Nantes (where people give 4 kisses)? How many times should they kiss then? What does the etiquette say?

I previously wrote a similar question but it was about "when should one do 'la bise'" and not "how many times should I do it".

What I usually do

So far, I have only ever been in a situation where people give two kisses or more, I haven't encountered any situations where people would only give 1 kiss. I was raised somewhere where we give two kisses, so that's my "default" mode. When meeting with people giving more than two kisses I usually only do two of them leading to awkwardness and possibly rudeness on my part.

Sometimes someone will say "it's three where I come from" and then present their cheek. In which case, I will do the three kisses because that seems to be what is expected.

Etiquette generally says: "When in Rome, do as the Romans do" for international travel, but it can also easily be applied to travelling to other regions with other cultural customs within a single country. That means that for your first question:

Given that, if someone from Montpellier comes to visit someone in Lyon, how many times should they kiss?

In general, if you visit someone in Lyon that expects 2 kisses, you do two if you are aware that that's the custom there. That last part is important, given that I've found several resources that seem to point out even French people don't know how many are to be given:

The number of cheek kisses you exchange with someone depends on the region you find yourself in. To make matters even more confusing, there are discrepancies even by region.

Don’t worry if this sounds confusing because even the French get confused.

You can see this on your map as well: It looks a lot like a pointillist artwork, and even within Lyon I can see some specks of other colors, for people that do more or less kisses. So there is no definitive rule, except that it's gracious to adapt to another person's wishes, to do as the Roman does. At least that's what I was taught about 'birthday greetings', a thing that's somewhat similar to la bise for Dutch birthday parties.

If someone tells you 'I'm used to doing three kisses", it's easier and more graceful to adapt and add a third kiss (even if you're on territory where you only do two), than to argue that a map on the internet said that no, over here you only do two, or that it should be four. So, if a person from Montpellier and one from Lyon meet in Nantes, they can start with giving two kisses. If the person from Montpellier then points out that they'd like to do a third, do a third kiss to humor them. It's indeed somewhat expected that you do the third kiss when someone points out they're used to doing that, so you've been doing that right.

One last thing: If you can, try to remember what the people you're dealing with have as their personal preference. General rules like the one on your map are great for figuring out what you technically could encounter in the way of 'expected behavior'. But imagine an elderly person that grew up in Nantes and currently lives in Lyon, they're probably going to want 4 kisses if that's what they've done their entire childhood. Making them ask for those last two every time you visit them would probably become a bit tedious and awkward.

Not the answer you're looking for? Browse other questions tagged politeness etiquette france greetings or ask your own question.

8
When should one do "la bise" in France?

4
How not to be rude when noticing people?
8
When should one do "la bise" in France?
3
Etiquette about signing card when coworker leaves
11
Telling parents that it's okay if their child doesn't kiss me
7
How can I greet people when I encounter someone searching for bottles in trash cans?
1
How to greet Teachers and Staffs?
0
How can I find out how many photos I should take If I'm given a film camera to take a picture?
3
What is the etiquette around greetings in online communication in India?
9
When offering a ride through a ride-share app, how to politely assign obese people to the front seat?
7
How to make eye contact while talking with more than one person?