Is there a way in the European culture to consistently refuse to do small but annoying favors to coworkers and friends without alienating them?

I have recently relocated from my home country, Japan, to Europe to work here for a while in an international team, and I am experiencing a big cultural problem about interacting with Europeans. The problem is that I am often asked face-to-face by my new coworkers and friends to do favors such as:

"Mitsuko, you translate texts incredibly fast. Could you please translate this short text for me now? It's just 15 min for you, but an hour for me. I'm terribly overburdened by work today and also have to attend an appointment with a doctor."

"Hi, this is Eva. I just missed the last train to my town and hotels are ridiculously expensive here. I don't know what to do. Just asking, is there any chance I could stay overnight in your apartment?"

"My talk starts in 10 min and I can't get my laptop working properly. Can I use your laptop to show my presentation?"

I feel embarrassed each time. I have almost never been in such situations in my home country. We don't ask for such favors. Not only do Europeans ask for them often, but they also do it very directly, leaving no choice but to either agree or explicitly decline. And it is hard to decline, because (i) they ask friendly, (ii) they make a strong case, and (iii) it's simply hard to say,

"Sorry, I'm not paid to translate texts for you and do not want to go home 15 min later."

"Sorry, I can't be sure you won't damage my camera or accidentally change something in its complicated settings."

"Sorry, my laptop contains private data such as the browsing history, which I don't want you to see, and I also can't be 100% sure you won't infect my laptop with some spyware."

Here's what I want: I want to avoid the inconvenience of doing favors (except those that do not really cause any inconvenience, such as giving advice), but, at the same time, I don't want to undermine my relationships with my European coworkers and friends. Although I do not intend to ask them to do favors for me, I do want them to remain friendly and nice towards me, because they are my environment.

People asking me to do favors are of different European nationalities, although most of them come from Eastern Europe (e.g., Slovakia, Latvia).

Is there a way in the European culture to consistently refuse to do small but annoying favors to coworkers and friends without alienating them?

Over here (The Netherlands), declining a request is simple: You say no, you can't help. We ask for favours directly, which means declining them can simply be done directly too. If you genuinely wish you had been able to help but are still unable to, you can add something about being sorry you are unable to help at the current time, for politeness' sake. For small requests, this should generally be it. I at least have never had anyone act alienated because I said no, at least not anyone I care about.

I do have to note that your title mentions 'small but annoying favors', but some of the favors you're being asked would in no way qualify as 'small' over here, like asking for a place to sleep or borrowing expensive devices. For declining these larger favours (or declining small ones when you have a history of saying yes to similar favours), you might need to include an excuse for declining. In such cases, I've found it's best to be honest as then you won't have to worry about keeping up the lie. Though you might want to be slightly less specific when giving your reasons as you were in your post. So 'I'm not paid to do that work and don't want to go home 15 minutes late' becomes 'My work schedule is already full, I really don't have the time today/this week'. And 'I'm not comfortable watching porn with you there' becomes 'I already have other plans for the evening and I can't have a guest over.'

It is important you learn to stay firm. Don't let yourself be goaded into an argument about your reasons for declining vs. their reasons for asking, and which takes precedence. Stay firm, stick to the 'no', and keep further responses brief. Don't let a fear of alienating people guilt you into doing things you are not comfortable doing.

It's probably also a good idea to be aware of both the Foot in the Door and Door in the Face techniques: Don't feel you have to agree to larger favours just because you did a small one first, and also don't say yes to smaller favours just because you declined a bigger one first. In all cases, if the favour asked for is still not something you can actually whole-heartedly say 'yes' to, keep declining.

And finally, if used sparingly, 'counteroffers' have worked for me to mollify people when declining favours. If you don't want to loan people your laptop, maybe you can offer some help with trying to get the other laptop up and running, at least so far that it will show the presentation? Again, only offer what you are comfortable offering, but sometimes declining a favour by offering another kind of help, one that you're comfortable giving, is still very much appreciated.

In my experience, the people that would end up alienated by me saying no to their requests in the ways described above, are the same ones that keep pushing after I've said no. Usually, these are also the people that don't conform to the norm of reciprocity, and as such, they are not friends. My true friends respect my boundaries, and we can tell each other 'no' without it being a big deal.

In addition to the excellent answer by Tinkeringbell I'd like to make some additions (German point of view):

you are absolutely allowed to cut the emotional involvement - you don't even have to say you are "sorry". Just shrug, and give a brief explanation, like

Less details are generally better (less of attack surface). Try to suggest it's not you declining a request, but circumstances beyond your control making it impossible (or too costly) to comply at that moment. Insistence of your conversational partner would be considered uncivil under most circumstances.

From the perspective of Czech Republic, i.e. a place some would "wrongly" call Eastern Europe, I would say what is expected depends a lot on context and your actual relationship level with the person.

When a good friend asked me to bunk on my sofa in my single days, I'd say sure because it wasn't a big imposition, and that's the kind of things friends do, unless I had a girl coming over for example. If a coworker I barely knew asked me the same thing I'd probably make up some reasonable half-excuse, "Sorry I've got plans already," unless I was feeling generous. (Also note that that request seems to be couched very carefully "Is there any chance" which I'd interpret as leaving you a lot of room for just saying no). If someone asked me now when I'm married with a kid, I'd find it a rather tall order and few people that know me would ask that.

Same goes for the other requests. In my culture I'd say we do tend to be forthcoming with reasonable favor's and it's mostly expected people will help out. On the other hand it is not particularly common to get all that many of them, and usually some level of friendship is expected, unless they are strictly work related.

I would be a bit weary if you are getting many of them since it might just be people trying to take advantage of you, because they perceive you as being "better off" so you should "help them". I don't want to imply this is normal with people from Eastern Europe since most of them are great and quite reasonable, but I've also seen some who are a bit entitled, thinking the "wealthy" westerners owe them something. In that case you might not be able to salvage it anyway though, so just saying straight up no might be best.

Ps.: The last example of wanting to borrow a notebook for a presentation to what I assume is a client, seems less like a favor and more like - we need to give this talk now, stuff's gone wrong, let's all help. I would not hand over my logged in laptop, but would offer to click through the presentation for the person. Obviously again depends on exact context, but I'm not risking losing a client because I wouldn't help out.

Dutch perspective here. We are a bit more direct than others.

I would say something like "I am unfortunately very busy with project X" or "No, thank you" or "Person X may be able to help you" or "My manager has assigned me to this task, you can ask them to re-prioritize".

Or I would ask my manager if I should stop working on my assigned task to help my co-worker and, if the answer is no, relay that information to the co-worker so that the blame has been shifted.

Another option is to do the task badly, and late. They'll never ask you for help again. They might think you are incompetent, lazy or untrustworthy, but they are not your boss and it will stop them from asking.

Finally, there is an awesome technique called the "Wally reflector": 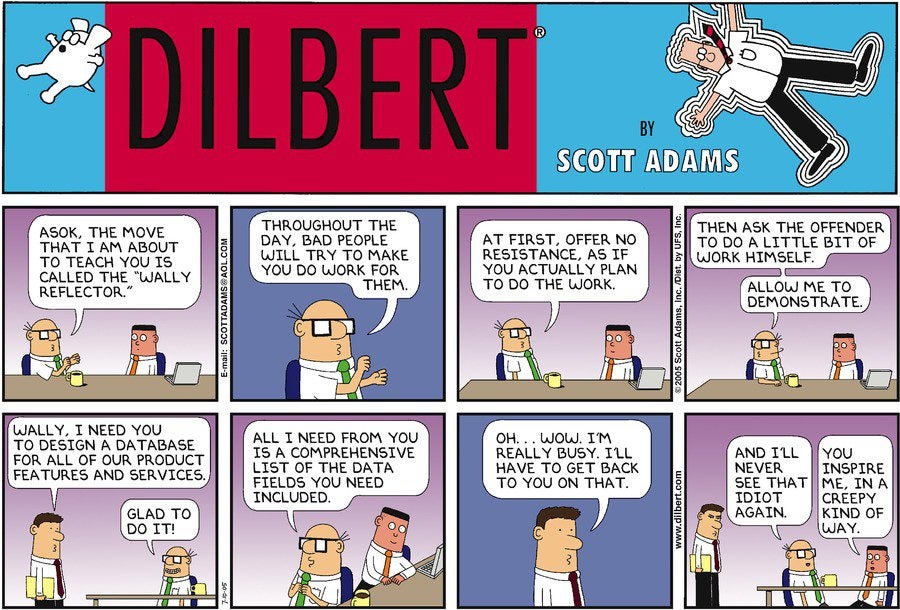 Not the answer you're looking for? Browse other questions tagged saying-no europe cross-culture or ask your own question.

43
How can I talk to my boyfriend about chores "sharing"?
11
How to get along with European roommates?
29
How to deal with a suite mate who gossips about me within the first few days of move-in
10
How to be friends with a man, but not with his wife
14
How to calmly respond to friendly peer-pressure when it's a major pet-peeve?
5
Having been highly praised for my professionalism, am I expected to return the praise?