How inconvenienced will a server be if I ask them to split a check two ways? [closed]

I regularly go on dates with people where our dinner arrangement is to each pay for our own meal. When we ask a server to split the check (either by seat or 50/50 if there were multiple communal items), the server seems happy to do so and is able to do so quickly.

However, I periodically read accounts online from restaurant servers that talk about how annoying it is to be asked to split a check. I like to think I'd be good at spotting that annoyance, but I know that in the US servers feel the need to always seem cheery and accommodating.

I can understand that splitting a check for a large group would be annoying, but I would assume that modern point-of-sale systems make a two-person check easy to split.

Is it rude to ask a server to split a restaurant check two ways? How inconvenienced will the server be?

I know that this varies by region; in Russia we asked to split a check and were curtly told, "No. One check." I'm looking for answers based in the United States or similar cultures. I'm especially interested in an answer from someone who's worked recently as a server.

Even in the US, this largely depends on the restaurant... or more specifically, on the software (if any) the restaurant uses for their point of sale (POS) system. I've had servers tell me they can't do it by seat but that they can do it in half... and very occasionally, I've had them say the opposite... and other times, they won't split it at all.

I've not ever been a server but the way the POS system is designed largely determines how easy it is to split a check at the end of the meal. Some systems are pretty low-tech and, while they can pretty easily split the check in half, splitting on a per-person basis can be time consuming and pedantic.

On the other hand, some restaurants have fancy systems where the server enters the order by seat rather than by table, which means that the check is, effectively, already split. They can select the seat and swipe a card or tell the system to print checks for each seat, or for different groups of seats.

Here's an example from a restaurant chain here in Austin, Kerbey Lane: 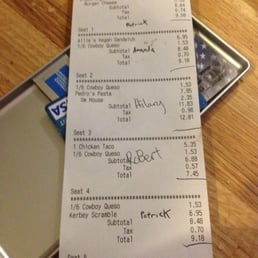 As you can see, each seat is totaled separately. I think there's also a total at the bottom of the receipt if one person is picking up the entire tab.

Now, I think the important thing - and where this actually gets into Interpersonal Skills - is to respect your server's time, particularly if it's a really busy at the restaurant. Before the meal, ask them if they can split the check either by seat or in half. Generally, if they know they need to do this ahead of time, they can make it easier on themselves at the end of the meal. Remember that if you're paying by seat, if you get any communal food (appetizers or desserts), someone will likely have to pick up the entire cost for it, so note who that person will be as well. Some systems may allow an item to be split in half but probably not in six. Make it easier on them and have someone pick up the queso alone.

If they agree to split by seat, particularly if you're in a large group (6+) and you're all paying separately, consider padding the tip a little for them. It takes a lot more time to run six cards than one.

It's definitely not rude, though. You're asking someone to do their job. They may be slightly inconvenienced because it takes a bit of time but by giving them advanced notice (asking permission) and a little bump in their tip (showing appreciation), you're showing that you respect them and appreciate their time.

Adding to the existing answer, again depending on their POS system. To make it easier for the server, be prepared.

Not the answer you're looking for? Browse other questions tagged united-states money service-personnel or ask your own question.

29
How can I get out of sitting between two professors?
9
How can I ask my girlfriend to share the cost of our dates rather than having to always pay for them myself?
2
How to maximise the chance an ex will return money I leant her
73
How can I ask my girlfriend to split gas money for a long trip?
10
How to tell someone they broke my code and ask them to (help) fix it?
1
How to tell my parents I want to live in another city and ask them for their support
5
(How) can I ask gifts be in cash/check instead of more restrictive instruments?
3
Group Date Split Check
3
How to break a two year old glacier!